Posted on September 6, 2015 by ThreeIsAMagicNumber

Have you ever fallen in love with a place at first sight? I did, last year when I went to St. John’s Newfoundland for a work trip. I had this overwhelming feeling that I belonged there, even though I’ve lived my entire life on the opposite coast.  Now with that feeling, came the desire to share the place with Tom. He’d heard me talking about it for so long he was game to going and checking it out, so we planned a week’s vacation. When I was there, I spent the better part of daylight hours working, so I didn’t get a chance to explore much. This trip would be different.

To make it even more special, we decided to rent a ‘Jelly Bean’ rowhouse and found a terrific one though VRBO. We’ve taken to renting houses rather than staying in resorts/hotels for the last few years to minimize the amount of ‘stuff’ we have to bring with us by having access to our own laundry facilities, a kitchen to store our breakfast/lunch stuff (and wine of course) and not sharing a bathroom like we do at home. There is also the elbow-room we get from having a whole house, no matter how big or small. It makes it feel a much more homey experience overall.

To get as much vacation bang for our buck, we booked a red-eye flight on a Friday evening after work. Even though I was exhausted, I just couldn’t sleep during the flight. Something about airplane air circulation that makes me feel like I’m lacking oxygen when I’m sleeping. I looked around jealously at all the people around me passed out while I was watching yet another movie. We switched planes in Tdot in the morning and landed in St. John’s around lunchtime on a bracingly cool but blue skied day. It’s a pretty small airport so we were quickly in baggage claim, I went to wait for the bags, while Tom got in line to pick up our rental car. They had run out of the small car we booked, so Tom ended up with a Dodge Charger, bright red too ha!

I stood outside listening to locals speaking with each other near the smoking shelter either waiting for family to pick them up, or waiting for their flight off the island. I couldn’t help but smile and feel that little surge of happiness that we were finally there and I got to hear those wonderful accents again.

Tom had written down driving directions to find our rental house, but we got a bit muddled and ended up driving in circles a bit until he found the best way around so he would be parked on the right side of the street. The house came with street parking (using a special pass which was only valid for the block the house was on) and as the house was on a quite steep hill (steeper still at the top), all I could think of was thank goodness it wasn’t me parallel parking that big car. I think we’d still be there trying to park even now!

The owner of the house had left a key to the place in the mail box, not something we’d ever think to do here! We brought all of our stuff in and then headed out to pick up the groceries and wine of course.

The house still had a lot of the original Victorian detail and of course those creaky narrow staircases. I cannot even imagine trying to get furniture up them! It was even a challenge bringing up our (still over-packed even with laundry facilities) suitcases.

Here are some shots of the inside of the house. The kitchen was modern and separated from the living/dining space by the brick fireplace. They looked to be two separate rooms as one point, but the walls on either side of the fireplace/chimney were opened up to make the lower floor more spacious. 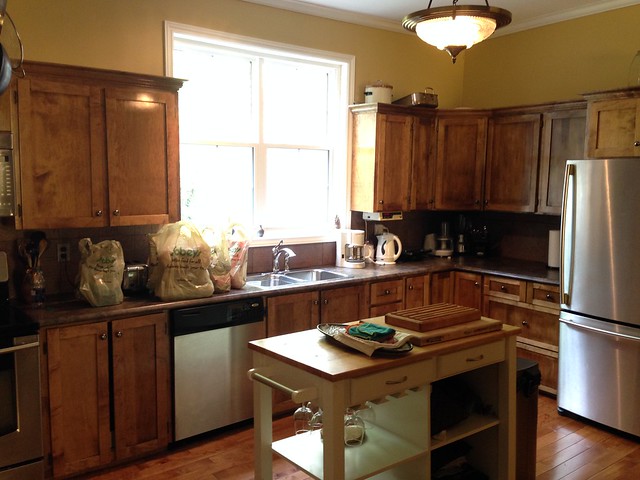 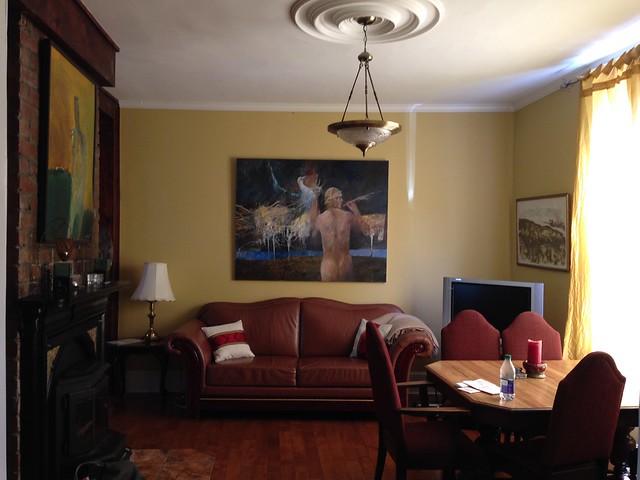 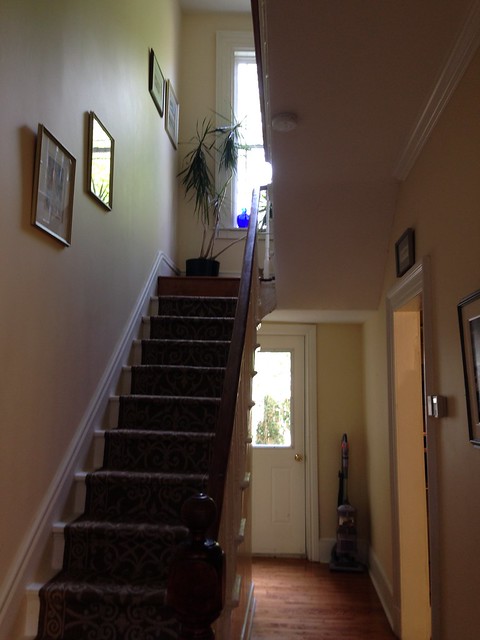 I especially loved the entrance with the stained glass… 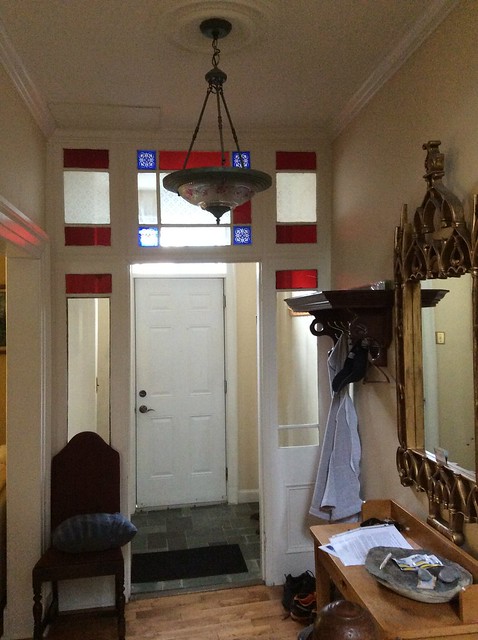 The master encompassed the entire top floor, with a sitting area and a pretty large bathroom. Tom took that one, while I took the bathroom on the second floor. 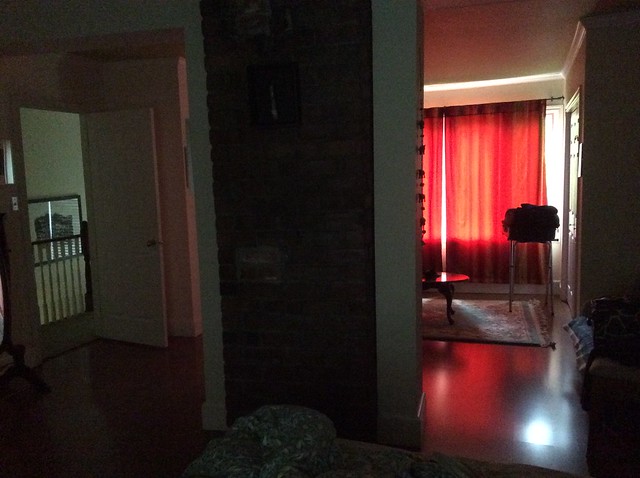 After running our errands we set out to forage for food downtown with a quick stop to gaze out at the view of the harbour. It was still really windy so the boats as well as the floating docks were swaying away in the water. 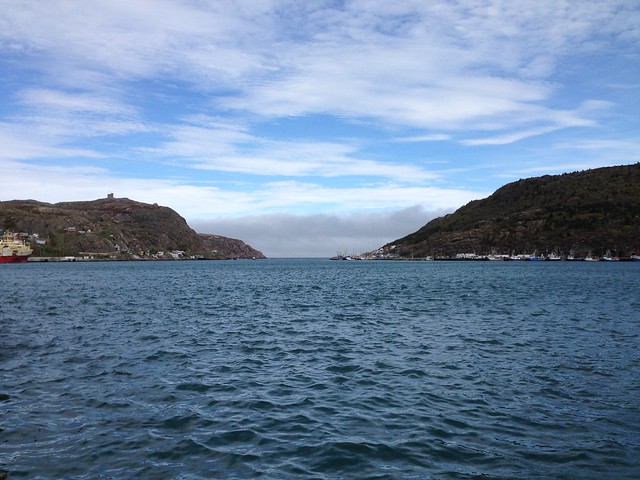 We didn’t have any particular destination and found ourselves outside the Yellowbelly Brewery, but it was packed so we decided to leave it for another day and ate at the Celtic Hearth restaurant. Tom and cod ‘n chips and I had a yummy lobster mac ‘n cheese. Sooooo rich I barely put a dent in it, but THE most lobster I’ve ever had in a dish that wasn’t all lobster. Most places out our way are pretty stingy with lobster, so a total treat! 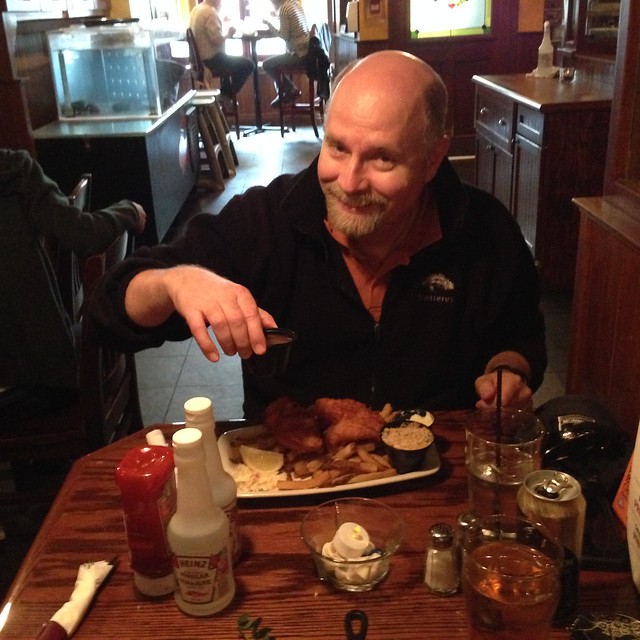 A meander back to our temporary home (puff puff) uphill helped to work off a bit of the after dinner bloat. We settled in for the evening to enjoy some wine and DVDs because we couldn’t figure out how to get the cable to work, ha! Good thing we brought some along. Problem was Tom thought we’d just started the season of Grey’s but turned out we were partway through and we’d run out. Oops.

It was a wonderful feeling knowing that I’d finally get a chance to explore more of this heaven by sea.

2 Responses to Heaven By Sea – St. John’s Newfoundland (Day one)

Speak to me! Cancel reply